This section of the Collective’s website provides a summary of:

Nitrogen entering Lake Rotorua (755 tonnes) originates from many sources. Here is a summary of where the nitrogen is coming from*:

Summary of the Proposed Nutrient Rules

The following table provides an overview of the Proposed Nutrient Rules. This is a summary only – see the full version here. 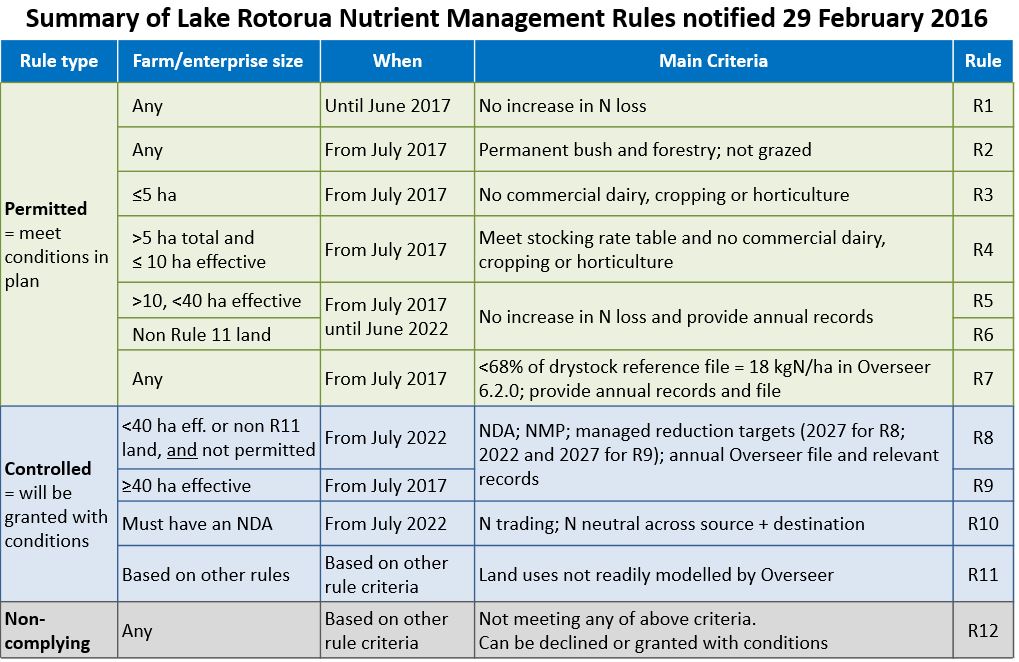 At the RDD meeting on 5  August, 2017 Councillors unanimously voted to accept a report and recommendations from the Independent Hearing Panel relating to Plan Change 10.  Submitters had 30 working days following the receipt of the notification of the decision, to lodge appeals with the Environment Court.  These appeals have now been published by BOPRC. You can view the appeals here.

Submissions closed on 27 April 2016. You can download the Fed Farmers and Collective submissions here

The NDA is at the heart of the new rules. The basic idea is that the sum of ALL the NDAs across all current pastoral land will reduce nitrogen inputs to the lake by 140 tonnes by 2032. While this is about a 27% reduction overall, BOPRC is looking at different ways of allocating NDAs i.e. some farmers will have to reduce by much more than 27%, some much less, depending on the benchmarked  N loss and farm type (Dairy or Drystock).

The logic behind the new nitrogen-focused rules is:

The Collective has been mainly focused on the new rules because they will be compulsory. Some farmers will be keen to explore options with the voluntary incentive fund which is also under development. Find out more about the gorse conversion fund and the incentives scheme.

The process for developing new rules

The process for developing new rules” trigclass=”maggie” rel=”fiction”] The nitrogen rules have been developed by BOPRC staff working with the Lake Rotorua Catchment Stakeholder Advisory Group, or StAG for short. The Collective was instrumental in getting StAG established as a collaborative means of influencing new policies and rules. It’s not perfect but better than the traditional way most Councils have developed RMA policy. StAG was the forum where the Collective negotiated splitting the 270 tonne reduction into three parts. You can see all the monthly StAG meeting agendas and minutes here.

BOPRC completed initial consultation on the draft nitrogen rules in October 2014. The formal RMA assessment of rule options – called a “Section 32” report – will also be put together upon rule notification. The Section 32 report will include an assessment of the economic and social costs of various rule options

Take a look at the feedback given by landowners at the two public consultation meetings held by the Collective in September 2014.

A meeting was held in Ngongotaha on 11 December 2014 to discuss the Lake Rotorua groundwater catchment boundary and how it relates to draft nitrogen rules being developed by Bay of Plenty Regional Council. We heard from two of the scientists involved in defining the boundary – Paul White and Kit Rutherford. There were plenty of questions from the audience which are summarised here.

As part of the Bay of Plenty Regional Council (BOPRC) developing the draft rules for managing nitrogen in the Lake Rotorua catchment an additional period of consultation was out between August and October 2015.
The majority of the feedback received came from drystock or deer farmers. In addition, there were a number of dairy farms and horse owners who provided feedback. Over half of the feedback came from lifestyle properties.