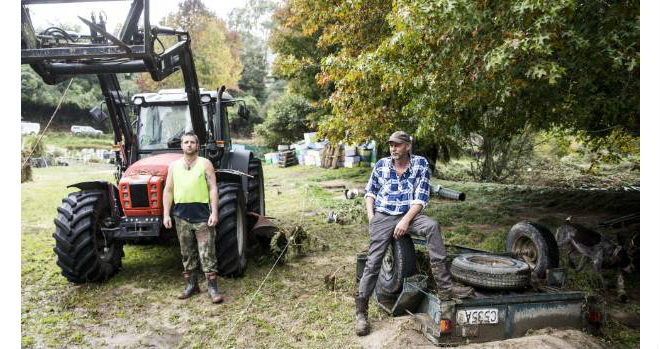 Matt Ward, left, and Neil Heather were rescued from rising floodwaters when they were stranded on top of a tractor.

Farmer’s attempt to save a neighbour trapped by floodwaters nearly turned to disaster when he also had to be rescued.

Ngongotahā Valley sheep and beef farmer Neil Heather along with another person were on Heather’s tractor on Sunday trying to help his neighbour, Matt Ward who had been trapped up a tree by rising water levels.

“I took the tractor down to rescue him and the water came up about another half a metre to a meter in about 10 minutes,” Heather said.

“It swamped the tractor, so we were both stuck.”

Heather said Ward had been attempting to move some empty beehive boxes out of the way of the water when he was swept off his feet, clinging to a tree for safety.

Ward then swum over to the nearby woodshed and helped rescue the Heather and his colleague who by now had climbed to the roof of the tractor to escape the water.

The pair were rescued after Ward along with neighbours threw a rope to the tractor and secured the other end to the side of the woodshed. They used a dingy to cart them from the tractor to safety.

Water levels rose by nearly a metre during heavy rain at Ngongotahā Valley, west of Rotorua.

“The fire brigade were there and they threw ropes to get us from there to the roadside. It was a bit hairy, but things kick in and you don’t really think about it at the time. It could have been a lot worse but it panned out allright,” Heather said.

Ward said he swam over to recover the boxes and got washed away before managing to grab onto a tree. The rising water level forced him to try and swim to the house, but instead he was swept down and got caught on a fence.

“By that stage it [the water] was through the house. We just had people just lifting things up.”

The area, along with Coromandel, Bay of Plenty and parts of the South Island, were hammered by rain on Sunday. The severe weather prompted a state of emergency to be declared for flooded Ngongotahā.

Access to his own farm was limited and the only route left available was through his neighbour’s property.

Matt Ward, left, and Neil Heather were rescued from rising floodwaters when they were stranded on top of a tractor.

“It could have been worse. I’ve had some sheep bridges taken out and it’s gone through the woolshed. There’s a lot of debris and mud and crap everywhere, like you do with any flood.”

Heather’s family has farmed the property for nearly 100 years. He said the last time it was this bad was 1958. Over the next few days he will asses the damage and check on his stock.

The heavy rain swamped his sheep yards and flooded the area under his woolshed almost up to its floorboards. He suspected most of his stock were in paddocks situated well above the flood line.

“There’s sheep in one low lying area and they could get well and truly out of it, there’s a big hill in there and hopefully they had the sense to do that.”