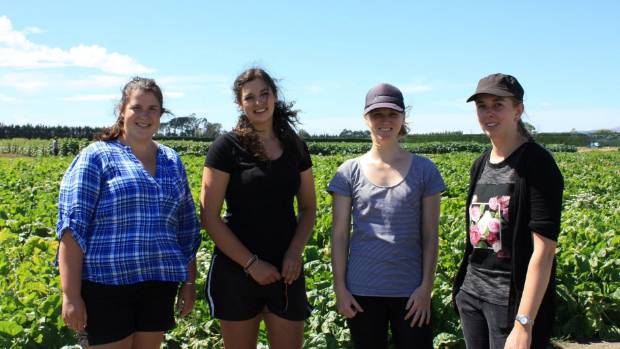 A group of super smart women is helping to find answers to one of the major environmental challenges facing farming – reducing nitrate leaching.

Based at the Lincoln University research dairy farm, Martin was researching the response of 12 pasture forages to nitrogen.

She had been monitoring plant responses to different levels of nitrogen applied as fertiliser to identify whether some were more efficient at using nitrogen than others. More nitrogen efficient pastures may lead to lower nitrogen inputs going into farm systems and less risk of nitrate leaching into waterways.

“I enjoy all aspects of my PhD study, particularly because of the variety in everything I do. I can be out in the paddock in the morning shifting the irrigator or taking samples, and in the afternoon in the lab, weighing or grinding them and then on the computer writing up the information,” Martin said.

The doctoral students were contributing to research in a $28 million, six-year primary sector initiative, Forages for Reduced Nitrate Leaching (FRNL).  The programme aimed to reduce farming’s environmental footprint by improving the nitrogen efficiency of animals and plants used on New Zealand farms.

Dairy, arable and sheep and beef farms were involved in the programme which focused on alternative pasture species, crops, and farm systems.\

The multi-partner approach is the first of its kind on this scale in New Zealand.

Grace Cun hopes that the research she has done for her PhD will make a difference to farming and the environment.
​DairyNZ senior scientist Ina Pinxterhuis, who leads the FRNL project, said that the doctoral students had provided valuable information about what was happening at urine patch level.

“Having these dedicated students researching specific aspects of diverse pasture species is invaluable. They have the time to delve into the literature, do detailed measurements, and develop a solid thesis describing their results and discussing the potential benefits to agriculture. We have been extremely lucky to find these six students. They have engaged well in the programme and even delivered papers and conference presentations on the way.”

Lincoln University’s professor of soil science, Dr Keith Cameron, said the application of science was important to the university and the agricultural industry.

“At Lincoln we are keen to focus our research in areas where students can see how what they are doing fits into the bigger context, particularly the application of science and the connection between scientific discovery and industry application.”

“The multi-disciplined, multi-partner approach to finding answers in projects like FRNL is the way of the future. When the students leave here, they will not only have new skills, but will also have contributed to the research. Many of the students we train at PhD level go on to make major contributions to New Zealand agriculture,” said Cameron.

Martin, now in the last stages of her PhD, said she was glad her hard work was being used to make an impact on farmers to reduce their environmental footprint and would not have taken the three-year journey if it was not useful to the industry. Once finished she would go on to work for a farm consulting company as an environmental consultant based out of Darfield.