Born and bred farmer John Butterworth is a true product of Rotorua.  He began his life in the hills of Mamaku and has returned there to the family land where he sharemilks on his parents, Jack and Shelley Butterworth’s Forest Gate Farm. His maternal side of the family, the Heathers have farmed their land Awarua Farm on the side of Mt Ngongotaha since 1922. “Our family farms mean a great deal to us all”. Along with a passion for farming John has inherited several other strong family genes. 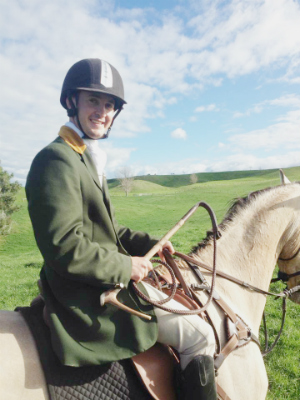 John began his farming career at Taratahi College in 2004 completing Level 4 Certificate in Sheep and Cattle Farming, followed by a Diploma in Agribusiness Management through AGITO in 2009.  His first job was on Mangamingi Station, a 3700ha property south of Rotorua. During his time there he rose through the ranks from farm trainee to Stock Manager, recognition of his keen eye for stock and pasture management. “At this job I learnt how to work hard, manage a large team of staff and manage up to 42 mobs of stock – dairy farming is easy!”

Having identified that his goal of farm ownership was a difficult pathway in the sheep and beef sector John decided to go dairying. When the opportunity arose to go sharemilking on Forest Gate Farm John realised a dream of being his own boss.

John is the current Federated Farmers Sharemilker Subsection Chairman for Rotorua/Taupo, utilising that political gene he has inherited. He is a vocal advocate for his sector ensuring their concerns and rights as business owners are heard by Local and Regional Authorities. John’s contribution to his sector extends to the Central Plateau Dairy Industry Awards which he has co-convened with Shelley for the last two years. Having entered the awards in 2011 to gain a “free independent review of my business”, he went onto win the Central Plateau Sharemilker/Equity Farmer of the Year in 2012, backed up with runner-up at the National Awards. “This competition enabled me to fast track my business confidently. I gained a better insight into every aspect of my business and came away with a clear future pathway”.

Last season John milked 600 cows on 200 ha and produced 251,000kg milk solids supplying Open Country Dairy. Farm systems are flexible to react to and match payouts.  In addition to the home farm, John purchased his own 64ha runoff in 2013 and leases land within the catchment.

Unsurprisingly John’s new hobby is land based and the result of another inherited gene, horses. Twice a week from April to August John hunts, a seasonal sport that dovetails in with his farming calendar. Seeing the countryside at high speed while clearing wire fences fuels the adrenaline rush John enjoys about the sport, along with the company and the etiquette.  He jokes that the feed bill for the horses would equate over time to a deposit on a farm, however maybe that investment has already paid off for him, as it was on the hunt field he met his partner Nicole Way.

John is realistic about the challenges that lie ahead for the dairy sector.

“You just have to look at the payout history; it has been very volatile for a number of years now. This is the lowest payout we have had in 8 years.  What makes it harder than eight years ago is that costs have skyrocketed since then. What we can do is assess our farm system and the cost structure that operates the system and see if we can rebalance things so we stay profitable”.