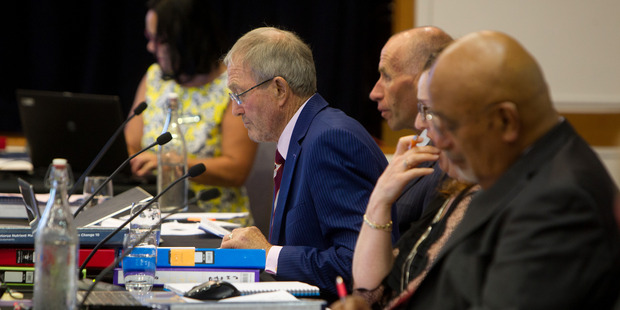 Public hearings into a controversial plan to reduce nutrient runoff into Lake Rotorua have started.

The hearings, for proposed Plan Change 10 to the Bay of Plenty Regional Council’s Regional Water and Land Plan, are scheduled for two weeks and started yesterdayat the Millennium Hotel in Rotorua.

Retired District and Environment Court judge Gordon Whiting is chairman of the independent hearing panel and was joined on the panel by Rauru Kirikiri, Gina Sweetman and Dr Brent Cowie.

Proposed Plan Change 10 covers rules to limit the amount of nitrogen entering Lake Rotorua from land use. The rules will affect rural properties in the Lake Rotorua Catchment.

But, before oral presentations from submitters got underway, representatives for Federated Farmers were told that more than 1000 pages of evidence it believed to be from non-expert witnesses was actually deemed to be from experts.

It became an issue due to timeframes – evidence from non-expert submitters had a deadline of last Monday while evidence from experts had to be received by February 22.

The regional council argued it did not have enough time to read evidence supplied by Federated Farmers before the hearings got underway.

Panel chairman Mr Whiting agreed, however said the issue would be specifically addressed in the coming days.

According to the regional council, the proposed rules are one part of a long term solution to improve water quality in Lake Rotorua and to meet water quality standards set by the community, nitrogen entering the lake must reduce by 320 tonnes by 2032.

Less than half of that, 140 tonnes, will come from proposed rules where landowners will need to make changes to the way they use their land.

The regional council has been allocated two full days to present its evidence to the panel and will outline its science behind the proposed changes and provide economic, social and cultural impact reports.

Those opposing the plan change say the rules are too tough on farmers and will make it difficult for the industry to survive, that the science behind the rules is flawed and incentives are not enough to convert farms into other uses.