In broad terms, since 2003/04 the farm has reduced fertiliser N inputs by 50kg N/ha/year on the milking platform, increased the amount of milk leaving the farm, eliminated winter cropping on farm and then replaced this (and external contract grazing) with pasture based wintering on additional leased run-off (48ha effective). Stocking rate had already been reduced slightly back in 2002, from 2.8 cows/ha to 2.65 cows/ha, as a result of exiting a less profitable drystock operation but keeping cow numbers constant.

The farm has been modelled in accordance with the current BOPRC OVERSEER modelling protocols and the 2003/04 OVESEER model was migrated to the current version and updated to ensure consistency with regional protocols.

In total, whole dairy farm system N losses have been estimated to decrease by 650kg N as a result of the combination of farm system changes made. While not a significant overall decrease (c 3% reduction), because the property is farming an additional 48ha, the total farm system N loss per hectare has dropped from 78kg N/ha/year to 65kg N/ha/year. In addition, given all of the properties farmed are compliant with their historic N loss limits and Stuart has currently achieved a net 11% reduction in N losses on his home farm and run-off, we are confident that a net N reduction within the catchment has been achieved.

The reduction in N losses primarily occurred through an improvement in the N conversion efficiency (an increase from 20% to 27%) within the farm system as a result of (a) the reduction in fertiliser N usage that occurred, (b) a reduction in the area cropped (no winter cropping) and (c) improved productivity (more N exported off the farm as milk for the same number of urine patches). Reductions in N losses haven’t been as significant as one might expect from these changes given the improved herd quality and improved pasture utilisation leading to an additional 36,000kg MS produced each year still have additional N cycling associated with them and lower N imported feed (maize silage) has been replaced with higher protein, but cheaper and better utilised supplement (PKE).

WATCH MORE VIDEOS IN THIS SERIES
Click on the images below
Economic modelling
Whole farm system modelling was undertaken for the property to evaluate the total change in profitability associated with the system changes introduced by Stuart. Farmax Dairy Pro models were created for both the current (2016/17) and historic (2003/04) years to validate inputs and physical productivity parameters. Standardised operating budgets, assuming an owner-manager structure, were then developed in Excel to evaluate the changes in profitability (if any). 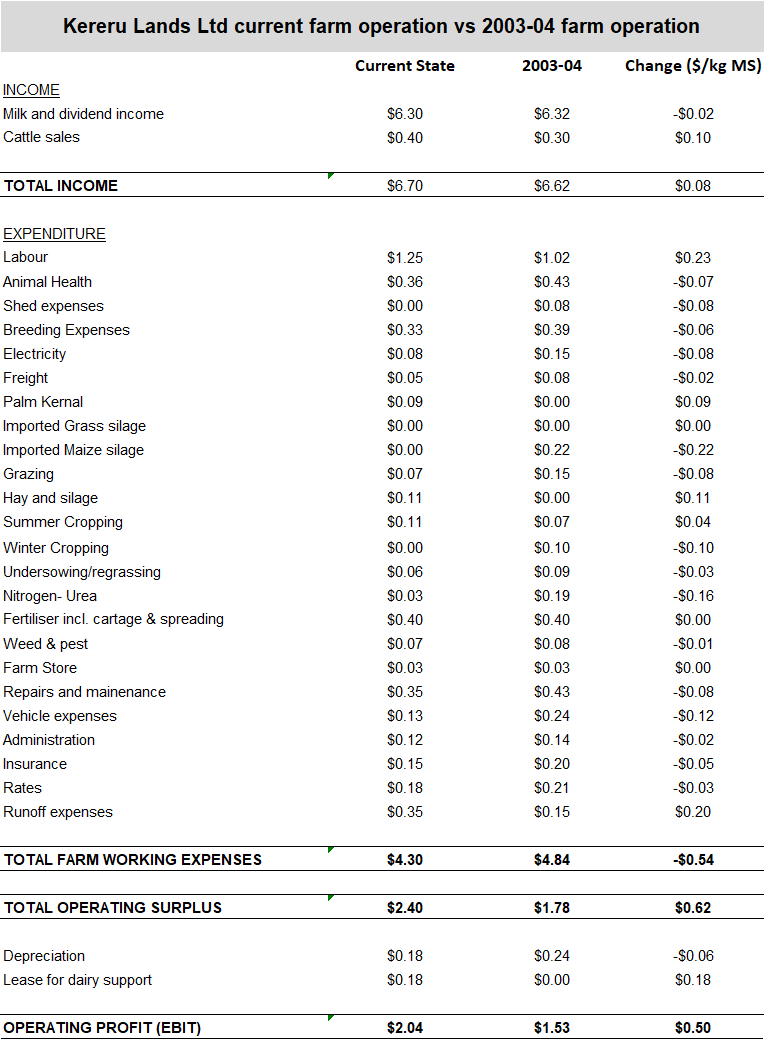 This is equivalent to an increase in profit of $24.46/kg N loss reduction.

Key risks
The kind of changes that Stuart has successfully implemented have taken place over an 8-12 year time period and are largely the result of incremental improvement informed by what works and what doesn’t for their system. While in theory the absolute changes (higher genetic merit cows, lower N fert use etc) will deliver reductions in N losses, a high degree of management skill would be required to successfully implement all of these system changes in a single hit (i.e. purchase an entire high BW/PW herd, reduce urea usage by 30%, increase land area). In the context of the timeframe that PC10 provides for reductions in N losses, graduated and staged system changes will likely be more manageable and successful for most farm businesses.

Stuart has also chosen to re-integrate aspects of his dairy farm system that he used to contract out back under his or his sharemilker’s management. This has involved exchanging a simple monthly payment for grazing for leasing a run-off, increased labour requirements and increasing the scope of (and potential risks associated with) the environmental responsibilities of the business.