Jack and Shelley Butterworth have been farming at Mamaku for over 30 years with a mix of dairy, deer, bush and pines. Their son John works as a share-milker, grazing about 550 cows on 200 hectares. In this video John talks about using imported maize to help maintain production and reduce nitrogen leaching.
WATCH MORE VIDEOS IN THIS SERIES
Click on the images below
Video Transcript - Read what was said on video

Jack and Shelley Butterworth have been farming at Mamaku for over 30 years with a mix of dairy, deer ,bush and pines. Their son John works as a share-milker, grazing about 550 cows on 200 hectares. Today John talks about using imported maize to help maintain production and reduce nitrogen leaching. 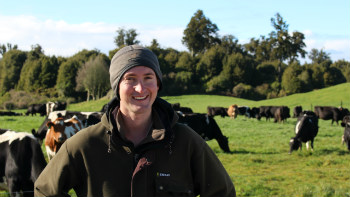 The farm sits high on the Mamaku plateau, about 20 kilometres west of Rotorua. We grow a lot of grass up here but our podzol soils are prone to pugging in wet conditions
We get over two metres of rain each year. When it’s wet we protect our pasture and soil by limiting grazing to four hours a day. Feeding maize also helps us meet our environmental targets.

Introducing maize silage allows us to keep milking twice a day right through to the end of May when we get a ‘shoulder season’ premium from Open Country Dairy.
The maize is grown by contractors in coastal Bay of Plenty. We agree on the price and quantity in September. It gets delivered and stacked on a concrete pad in late March or April. We inoculate and cover the maize stack so fermentation can get underway.

The maize is loaded into a feed-out wagon and placed in concrete bins on the feed pad. There is very little wastage, unlike feeding out on pasture. We add finely ground lime to prevent milk fever.

The feed pad has a gently sloping base and was formed by quarrying down a small rhyolite hill (knoll?). We remove the effluent using a scraper on the tractor.

In April and May the cows get five kilos of maize dry matter each day. This is fed out just after the morning and afternoon milkings. Once the cows dry off, they get about four kilos in a single session.
The cows really thrive on the combination of protein rich pasture and carbohydrate rich maize. The maize kernels are cracked during harvesting so they can be fully digested.

The cows stay in good condition which improves calving and mating performance in spring. The maize also lets us extend the winter grazing rotation and build up pasture covers for when the new milking season begins. The whole system is flexible and simple for staff to operate.

The main challenge with using imported maize is the price which changes each year. You also have the cost of a feed wagon and pad, staff time and additional effluent.
For our farm, these costs are justified by improved cow fertility and milk production, especially the shoulder season premium.

Secondly, maize has a much lower nitrogen content than pasture, leading to less nitrogen in the cow’s urine. This means less nitrogen ends up in the soil which reduces nitrogen leaching.

Imported maize has helped us meet our business and environmental targets. It gives us greater flexibility and the cows love it.

On the Butterworth’s farm, using imported maize was compared with using additional urea to grow more pasture for similar total milk production. OVERSEER indicates nitrogen leaching decreased by 19 kg per hectare. FARMAX analysis indicates a net cost of $23 per hectare, including equipment costs, at a $6 pay-out plus a share of the shoulder season premium.

Perrin Ag Consultants modelled annual N losses from a current (2016/17) real dairy farm in the Rotorua catchment and compared it with a scenario developed to estimate the N losses that would occur if they went back to a system that didn’t use maize silage.  The analysis  summarises the nutrient savings, impacts on profit and the wider farm system, risks and additional on-farm skills required to implement this good management practice. Key points are: