Rotorua dairy farmer, Mark Dibley, talks about how changing from turnips to chicory as a summer fodder crop increased profit and reduced nutrient losses.
WATCH MORE VIDEOS IN THIS SERIES
Click on the images below
Video Transcript - Read what was said on video

The Dibley family has been dairy farming in Rotorua for over 130 years.  Mark is the fourth generation of the family to farm their 234 hectare property that enjoys fantastic views across Lake Rotorua. Mark and Sophie milk around 570 cows and, like other Rotorua farmers, they’re coming to grips with the challenges of farming within nutrient limits. Growing Chicory as a fodder crop instead of turnips is one of the solutions they’re trialling to meet these limits. 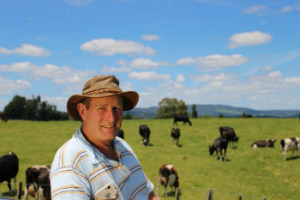 We went to chicory because it is going to benefit us for our nitrogen leaching off the farm more so than what turnips did.
We’ planted 15 hectares of chicory this year. It’s the first time for us and it’s for one herd, So we’ve got 450 cows on the chicory and that will keep us going about 2 or three months.

I had to get my share-milker on board. I thought perhaps half chicory half turnips for the first year He was happy to go the full chicory way. Which we did and I’m quite pleased that we did.

It’s quite critical of planting time with chicory, Soil temperature has to be about 12 degrees which is usually mid-October around here. We spray the paddocks with Roundup, kill everything out then we go straight in with the drill and drill the seed.

The direct drilling will help our nitrogen and phosphorus losses mainly because the paddocks don’t get turned over and you won’t get the leaching out of the soil. The other benefit is when it goes back onto young grass we will just drill straight back in as well so there is no tillage of the soil.

Chicory does grow quite fast, so it’s about 8 to 10 weeks once its drilled. And then we start grazing. it This paddock here was sown about three to four weeks ago and you can see that it has taken off really well. The optimum grazing level is about 7 to 9 leaves and about 30 centimetres high.

The chicory grows pretty well in a drier summer because it’s got a longer tap root. This paddock will be ready to graze in a week.

The cows come into the chicory after their morning milking and they are on there for 2-3 hours and then they go off into their pasture for the day. They’re getting about .9 of a hectare in this break for the day.

On the plus side, you can graze chicory longer than turnips. With turnips you graze it right down to the dirt, you graze it once and it’s finished. Chicory you graze several times. Once you graze it you’ve got to get back to it within 17 days.
After 17 days it tends to get a bit woody and then the cows won’t eat it and it won’t be as palatable.

We will re-grass again in the Autumn. It will be a little bit later because of the way chicory goes. Turnips usually goes back into grass a bit earlier. It won’t make much difference because you won’t be milking on it until the spring. We’ve been grazing the chicory for a week now and we’ve noticed that the milk production has gone up a bit. The cows tend to like it, it’s pretty leafy and they seem to be loving it.

An OVERSEER analysis indicates changing from turnips to chicory reduces nitrogen leaching by one kg per hectare, averaged across the whole farm. This is largely due to avoiding conventional cultivation at crop establishment.

FARMAX analysis indicates that chicory, compared to turnips, improves profit by about thirty-four dollars per hectare at a milk price of five dollars eighty per kilogram of milk solids.

Perrin Ag Consultants assessed Mark Dibley’s experience with introducing chicory as a fodder instead of turnips. This analysis summarised nutrient savings, the  impacts on profit and the wider farm system, risks and additional on-farm  skills required to implement this nutrient practice. Key points are:

The information provided in this video series is for general guidance only and is not intended as a substitute for farm specific advice.  Mitigation tools, technologies and products will continue to evolve. Lake Rotorua catchment farmers can contact BOPRC’s Advice and Support service or a professional nutrient adviser.
THIS VIDEO SERIES IS PROUDLY SUPPORTED BY: