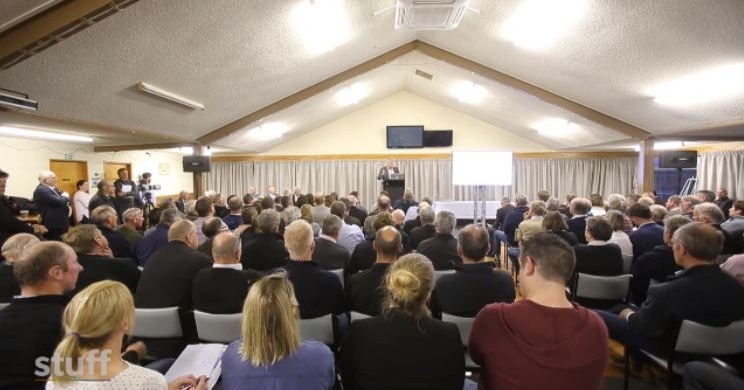 Farmers are worried about proposed water policy changes, but their concerns are largely based on a fear of the unknown, says Northland dairy farmer Andrew Booth.

In recent weeks social media has been rife with comments from on-edge farmers, and small town halls packed to the rafters as officials have been quizzed over the proposals.

Environment Minister David Parker released them last month, saying the health and wellbeing of water would be put first when making decisions, “providing for essential human needs, such as drinking water, will be second, and all other uses will follow”.

Some like Orari, Canterbury dairy farmer Andy Palmer want to make a “submission of substance” on the issue but feel they have little time to do so. The deadline is October 31.

READ MORE:
* Government to get tough on farming and councils by regulating for water
* Farmers overstating the impact of freshwater reform proposals – report

Former Synlait chief executive and chairman of the Freshwater Leaders Group John Penno said there would be change, and for some farmers pain, but the Government had given them certainty where before they were unsure about what was expected of them.

Booth said he attended a meeting of about 220 in Whangarei. The consensus was that something needed to be done to clean up waterways.

“The people who were making the comments didn’t know everything that was going on; there was a bit of scare mongering. The fear was potentially unwarranted.”

Booth and his wife Vicky sharemilk 420 cows on 174 hectares alongside the Mangakahia River, which ultimately feeds Kaipara Harbour. Over the last 10 years he has planted up and fenced off the section of river running through his property.

He supported the need for a national water quality standard, but said it was important that the changes were led by science rather than by emotion.One of the key issues voiced at the meeting he attended was the requirement for a fence to be set back five metres from a river. Many farmers had already fenced much closer and were not happy at the prospect of losing areas of their farm.

“The 5-metre setback is a big issue, especially for dairy farmers who have already put in kilometres of fencing and planted it – to rip all of that out and move it two or three metres back will be a prickly issue,” Booth said.

Penno said the Government did not want to punish the very farmers who had led the way in environmental efforts.

“If it’s a significant waterway I don’t think a 5-metre setback is too much, and there are people who have been doing that already as best practice. It won’t apply to all manmade drains that need to be cleaned out.

“If people have fenced at 4 metres [from a river], will they have to move?  Well they may, but when the fence is at the end of its life in 15 years, then it could be moved back.”

​Penno said the two major issues raised at the meetings he had attended were the setback and the demand for 1 part per million of dissolved nitrogen in waterways. For him, that was the correct level to maintain healthy ecosystems and was suitable for the “vast majority”.

“But there are a small number of places where the level of change will be too great, and it might not even be achievable. Those exceptions need to be identified. It’s not regions but catchments within those regions and when you narrow it down they are quite small areas.

“These exceptions shouldn’t manage the rule, we need a national standard and figure out how to manage the exceptions, not the other way round,” Penno said.

Palmer, whose farm has attracted the attention of Botanic Man David Bellamy because of the extensive planting and fencing he has done over the last 20 years along Ohapi Creek, said he was concerned over the short timeframe in which he had to respond.

“There’s a lot of science but it hasn’t all been presented to farmers. These are very complex issues if you want to make a submission of substance.”

Farmers could use the templates prepared by lobby groups such as Federated Farmers, Dairy NZ and Beef + Lamb NZ, but they were not specific to an individual’s property.

“There doesn’t seem to be robust science behind the 5-metre setback. If you take that amount of fencing, it will mean you’ll lose a hell of a lot of productive land,” Palmer said.

Penno said the extent of the changes had been exaggerated.

“The most important thing is this is not new, it’s the latest step of what began with the Resource Management Act, and the next big thing was the first national policy statement for freshwater in 2011.

“In many ways this is a much smaller change than what has happened in the last 10 years,” Penno said.