Nitrogen is a key nutrient to grow grass on farms, but when there is more in the soil than plants can use it is at risk of leaching into groundwater, or runs off into rivers and streams, degrading water quality.

Canterbury dairy farmers in more intensively farmed red zones, defined by Environment Canterbury as catchments where water quality outcomes were not being met, have been given clear targets to reduce the nitrate loss from their farms.

For Mid Canterbury dairy farming couple Grant and Jan Early, who farm within the Hinds Plain water management zone, these targets were staged. They must reduce their nitrogen loss by 15 per cent by 2025, 25 per cent by 2030 and 36 per cent by 2035.

Across the Rakaia River, dairy farmers in the Selwyn-Waihora red zone, much of which flows into Lake Ellesmere/Te Waihora, face a closer deadline and must reduce their nitrogen loss by 30 per cent by 2022. 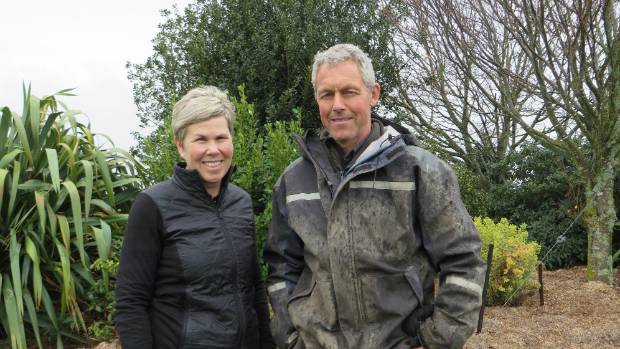 Mid Canterbury dairy farmers Grant and Jan Early are participating in a six-year research project to reach their on-farm nitrogen loss targets, while still remaining profitable.
Other farming types, such as dairy support and arable have lower nitrogen-loss targets to meet.

Each farm’s nitrogen loss figures were calculated by software modelling tool Overseer. Initially developed for fertiliser management, Overseer was adopted by regional councils to model the flow of nutrients on a farm.

When the Earlys, who farm near Mayfield close to the foothills, converted from sheep and beef to dairy 10 years ago nutrient leaching “was not on the radar”, Grant Early said. Dairy farmers were now aware of the sector’s environmental impact and the role they needed to play in its reduction.

Overseer showed the Earlys’ milking platform had a baseline nitrogen-loss figure of 88 kilograms a hectare a year. This baseline figure, set by ECan on a four-year 2009 to 2013 average, was the starting point from which their nitrogen loss targets must be made. This means their nitrogen-loss must drop to 57kg/ha by 2035.

These reduction targets were “quite substantial”, Early said. “While we don’t have all the answers yet I’m optimistic that with current and future science  we will achieve those targets.” 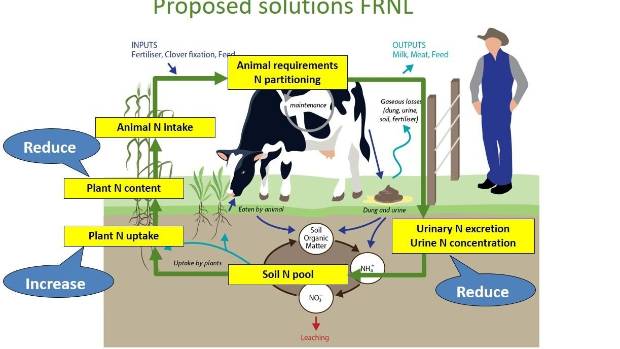 A farm’s baseline nitrogen-loss figure had a lot to do with rainfall and soil type “which we don’t have any control over”. The property had free draining Ruapuna stony silt loam soils and a relatively high 950mm rainfall.

“The soil type is better suited to dairy as you don’t get the pugging by cows of heavy soils, but there is an issue with drainage.”

To assist the Earlys to reach their nitrogen loss targets, while still remaining profitable, they were participating in a six-year research project, Forages for Reduced Nitrate Leaching, led by DairyNZ and other industry partners, which will finish in September 2019.

The Government contributed $22 million to the project, with additional funding from a range of research organisations and farmer levies. The project aimed to reduce nitrogen leaching on farms by 20 per cent.

The Earlys were one of four Canterbury dairy farms taking part, as well as two arable, two mixed livestock and one mixed arable and dairy farm to test some of the promising science and research on a commercial scale. A North Island dairy farm was also participating. 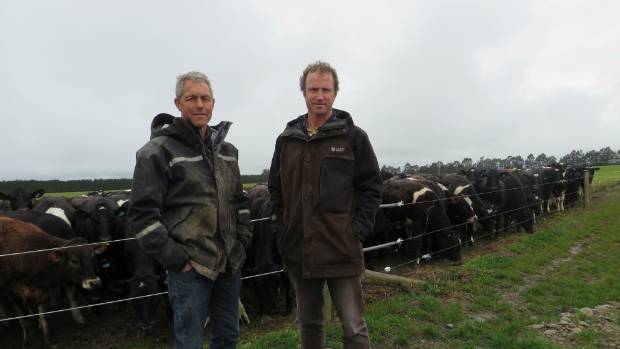 Since being involved in the project, the Earlys have decreased imported feed supplements by 12 per cent, decreased nitrogen fertiliser applications by 3 per cent and reduced peak cow numbers by 7 per cent.

Four years ago the Earlys were milking 1510 cows at peak on their 400 hectare milking platform, but numbers were now back to 1400, equivalent to 3.7 cows per hectare.

“There has been a reduction in total milksolids, but an increase in per cow production.

“A lot of farmers have cut cow numbers, particularly since the downturn.”

A promising development was the use of the forage herb plantain in pasture. The project found that including plantain in traditional ryegrass, white clover pastures reduced nitrate leaching.

Cow urine patches were the biggest culprit when it comes to risk of leaching, producing more nitrogen in a concentrated area than can be utilised by the pasture. Plantain can reduce nitrate leaching largely through a “soil-modifier” effect and dilutionary effect on the urine. 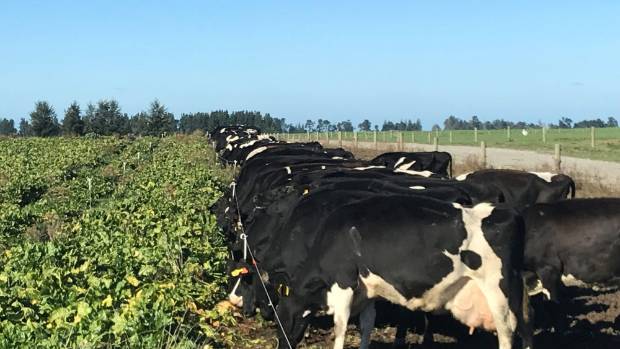 Feeding fodder beet to cows reduces nitrogen leaching as it is high in carbohydrates, but low in protein.

As plantain mixed pastures were not yet recognised by Overseer, farmers using the forage herb will have to wait to receive a reduction in their Overseer nitrogen-loss figure. Trial work shows that plantain needed to be 20 to 30 per cent of a cow’s diet to be of significant benefit.

“Plantain has a lot of pluses. We can manage it the same as traditional ryegrass, white clover pasture with no loss of production. But it’s a matter of getting 20 to 30 per cent in the diet,” said Early.

Plantain was being sown in all new pasture mixes on the Early farm. “It’s easy to establish in new grass, but after three to four years it doesn’t compete well with ryegrass and diminishes.” To counter this, field trials were being done spreading plantain seed with fertiliser and direct drilling it into existing pastures.

Feeding fodder beet was another way to reduce nitrogen leaching as it was high in carbohydrates, but low in protein.

As well as feeding it on their support block during winter, the Earlys grew a small amount on the milking platform as a transitional autumn feed. Science suggested that the benefits of fodder beet in reducing nitrogen leaching outweighed the higher stocking density on the crop paddocks. The biggest benefits were seen when this low-nitrogen feed replaces high-nitrogen pasture, for example through less fertiliser used in autumn. 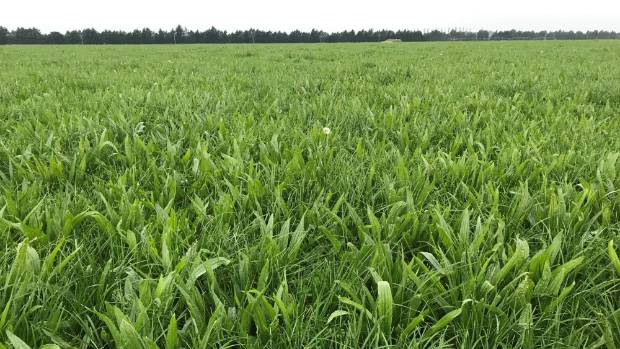 Catch crops have become standard practice following fodder beet in a bid to use the nitrogen in the soil rather than allow it to leach out in winter and early spring rain. Catch crops can include greenfeed oats, barley, triticale or cool season active grass.

Previously, the Early’s crop rotation had sometimes included a fallow period between finishing a winter kale crop and planting a second year kale crop. Now the Earlys follow the fodder beet on the dairy platform with greenfeed oats (oversown with short rotation ryegrass) which was taken for silage in the spring. Fodder beet on the support block was followed by barley as soon as conditions allow.

As the milking platform and 250ha support block were about 90 per cent irrigated, the Earlys had five soil moisture probes on the dairy farm and three on the support block to avoid any unnecessary watering. “Water is expensive, so we only want to be irrigating when we need to and of course avoid any water and subsequent nutrient drainage.”

The support block supplies all the winter feed for the milking cows, as well as grazing for young cows and supplying most of the barley grain for in-shed feeding of cows during the milking season.

The Earlys also aim to utilise grass as much as possible, reducing bought-in supplementary feed, as well as matching nitrogen fertiliser with grazing round length and applying less per application.

“You are collecting more data on farm than you would normally, which helps with management,” Giera said. “It is good to be involved with a project that is at the forefront of achieving environmental sustainability.”