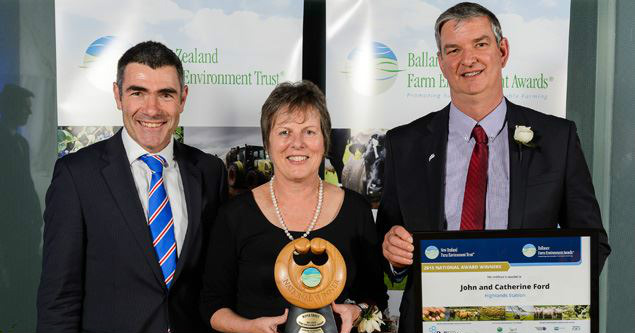 It is the first time in the five years since the award was established that a North Island farming business has won.

The Fords were presented with the Gordon Stephenson trophy by Primary Industries Minister Nathan Guy at a Parliamentary function.

The judges said the sheep and beef property had the “wow” factor and had been chosen from out of 10 regional supreme winners. It stood out in terms of environmental sustainability and impressive production and performance figures, they said.

The Fords own 1240-hectare Highlands Station, sitting within the Lake Tarawera and Rotokakahi catchment.

Highlands Station has a ” much loved feel” and its outstanding meat and wool production puts it among New Zealand’s leading sheep and beef farming operations.

Earlier this year the Fords told Fairfax Media they felt they were farming on a knife edge because of local regional council plans to cut phosphate run-off in the Tarawera catchment.

They said they entered the competition partly because they hoped any success might strengthen their case with the local regional council, which John believes could be aiming to retire land within the catchment.

The judges said the Fords were very careful to manage the volcanic soils appropriately, with farm management practices matching the capabilities and catchment of the land.
Highlands Station also has extensive native bush areas, including 140 ha under QE II National Trust covenants.

In order to minimise erosion, the Fords have built a network of almost 200 retention dams to reduce run-off and scouring during heavy rainfall.

Highlands Station sheep and cattle production and profitability was rated in the top 5 per cent in the country with excellent stock in top class condition producing an impressive economic farm surplus.